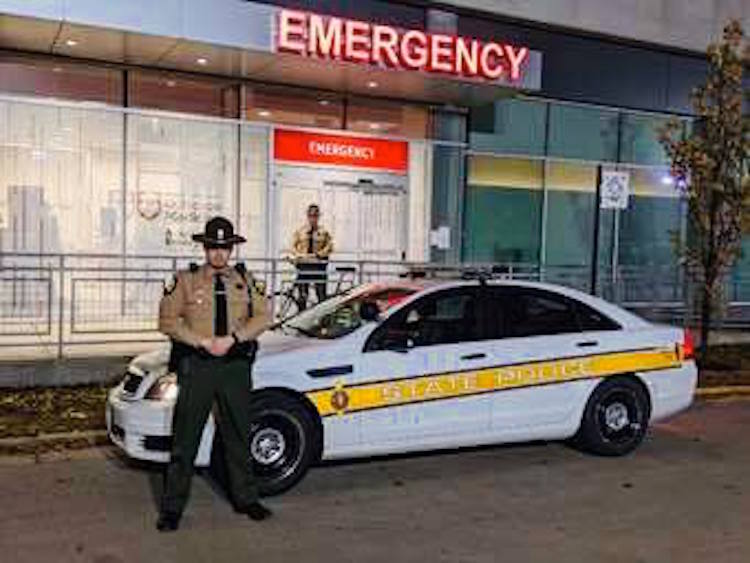 DES PLAINES — When a transplant team’s vehicle got a flat on the way to the hospital, two Illinois State Troopers jumped into action.

The troopers were the first to arrive on November 26th, 2019 at approximately 4:18 a.m. on I-55 northbound at Throop Street.

That’s when Trooper Cibrian and Trooper Snisko learned the disabled vehicle was an organ transport vehicle with a flat tire.

Three people from University of Chicago Medicine – a surgeon, a transplant coordinator, and a medical student, who were traveling from Midway Airport back to UChicago Medicine’s Hyde Park campus, were rushing the heart to the hospital when their vehicle got the flat.

The troopers immediately realized this was a time-sensitive situation and without hesitation they transported the three people and the donor organ to the academic medical center, according to a news release.

The Illinois Department of Transportation minutemen also arrived and remained on scene to repair the flat.

The Troopers safely completed the transport of the precious cargo, making it possible for the doctors to perform the surgery in a timely manner.

“Time is of the essence when it comes to transplant surgery,” said Ashley Heher, Director of Media Relations and Breaking News for UChicago Medicine. “There is about a four to six hour window of time for a heart to remain viable for surgery and the team had already been traveling for approximately 3 hours,” she concluded. The spokeswoman for UChicago Medicine advised the transplant recipient is recovering.

“Our District Chicago Troopers were able to turn a potentially bad situation into a thankful ending for at least one family this Thanksgiving holiday. I am extremely proud of our officers who acted without hesitation in this life saving transport. I am equally proud of the hard work all of our Troopers do each and every day in keeping our roadways safe and those hearts that travel upon them, even safer,” said Interim Captain Angelo Mollo. The ISP would also like to remind motorists when you see any vehicle on the side of the road stationary with their emergency or hazard lights activated, to slow down, and if possible, move over out of the lane adjacent to the stopped vehicle.